A year out from U.S. election, majority of white evangelicals are steadfast in their support for president.

During my years in the United States, I met a lot of evangelicals; they comprise a quarter of the American population, and are utterly unlike most Christians you’ll encounter in this country.

These are the people who paint “JESUS IS LORD” on the roofs of their barns, affix those fish stickers to their bumpers, tell you to have a “blessed day,” and make a point of chatting casually about their religious beliefs.

I, forever a product of my Scottish Calvinist upbringing, never knew how to react when someone smilingly took both my hands and told me “Jesus loves you, and we love you.” I’d just grin rigidly, and urgently will it to stop.

Still, evangelicals always seemed remarkably welcoming, and really, who can argue with rules like loving your neighbour, or turning the other cheek, or treasuring the most vulnerable among us, or giving to charity, and all the other things taught by the Nazarene to whom they speak in their hearts daily?

And then you see a picture like this one. 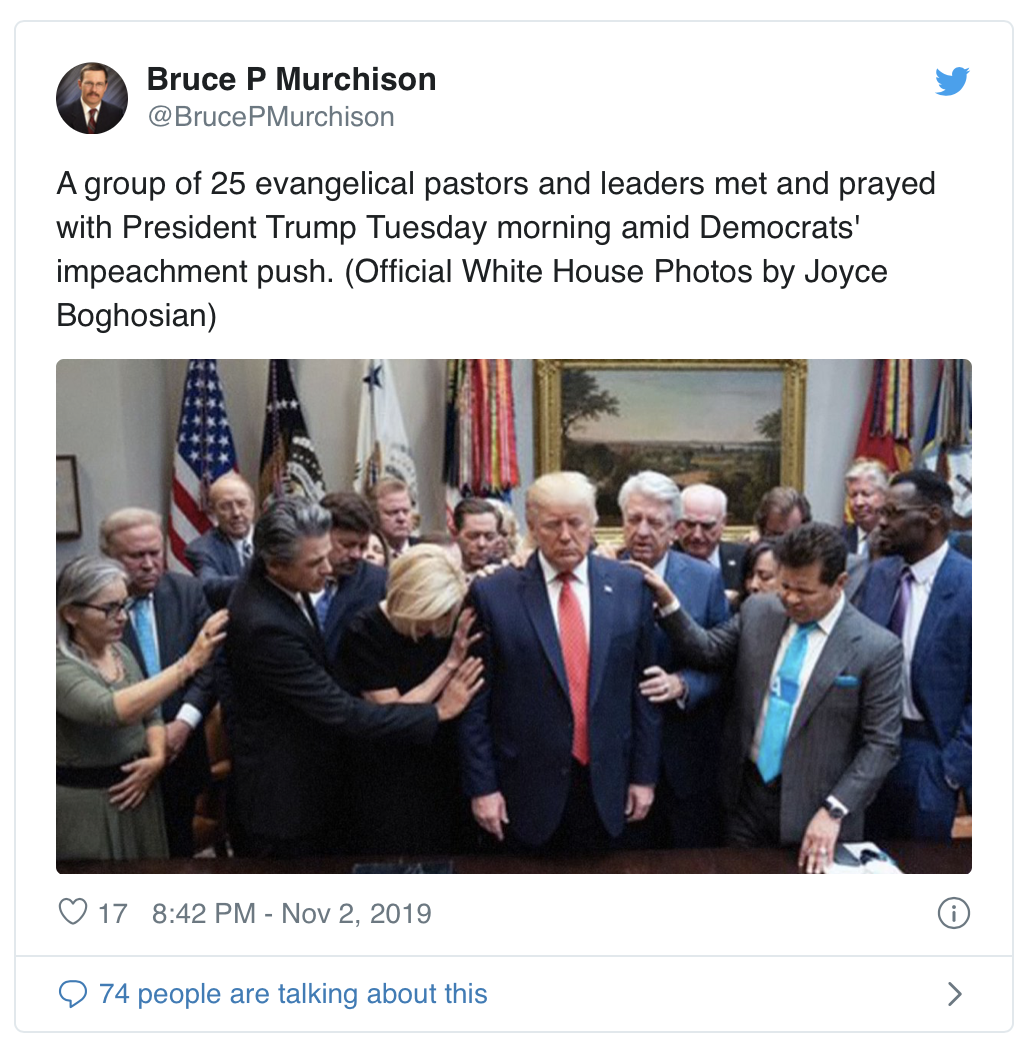 Look closely. Those are evangelical leaders and pastors — people who represent America’s various streams of fundamentalist Christianity — venerating a president who, I think it’s safe to say, reflects none of the qualities Jesus is believed to have embodied.

It has become almost banal to recite Trump’s ugly, vulgar, misogynist, racist mendacity, and yet here he is in an official White House photo, an image clearly meant to invoke the Last Supper, in the midst of an ecstatic laying on of hands.

It is no exaggeration to say many evangelicals consider Trump an anointed figure; a clearly venal man somehow chosen by their God to rescue America from venality. Eighty-one per cent of white evangelicals voted for him in 2016 (notice the “white” caveat there — more on that in a moment).

It’s certainly something he appears to believe himself. Last summer, he happily tweeted about a declaration by a right-wing broadcaster comparing him to Christ. 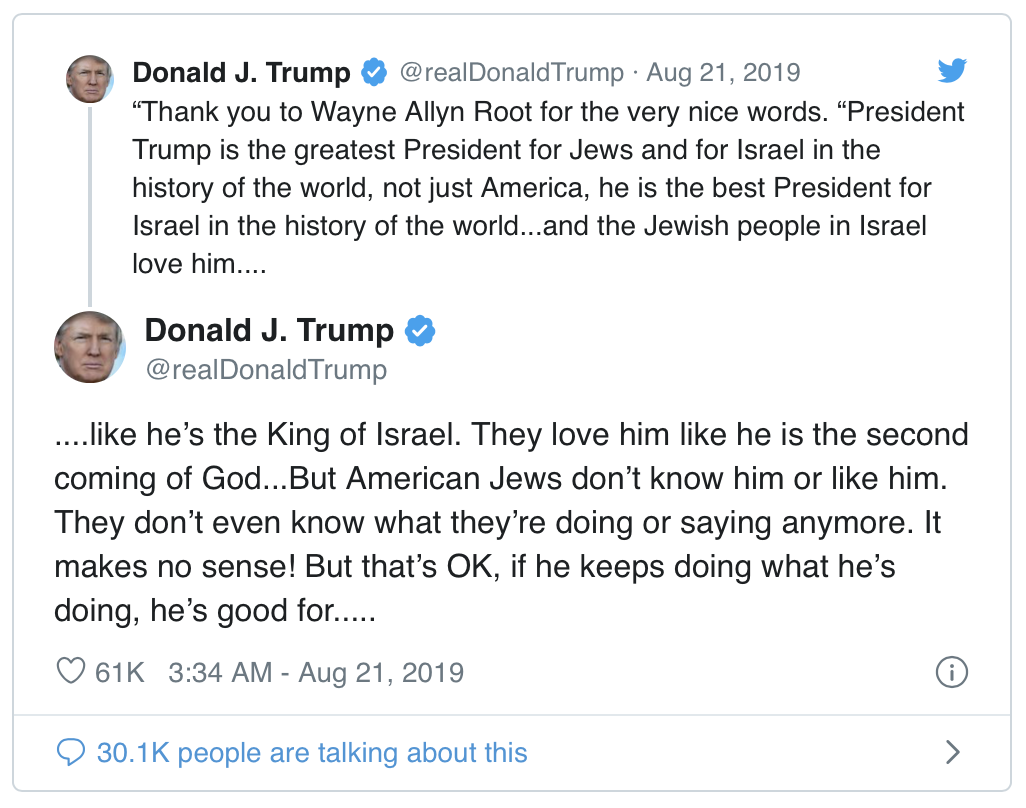 Hardline evangelists are among his close advisers, including one, now on Trump’s staff, who talks about dedicating “every ounce” of the White House to the “superior blood of Jesus,” and who thinks Trump’s enemies are actual demons.

My colleague Paul Hunter of the CBC’s Washington bureau attended one in Tupelo, Miss., recently where the opening prayer declared to God: “It is you that has appointed him, ordained, anointed him to be our great leader.”

I don’t imagine they said that about Barack Obama, whom Trump in any case declared was a Muslim.

And a favourite T-shirt slogan at the gathering was “God, Guns, and Trump,” guns, apparently, being part of the American evangelical trinity. 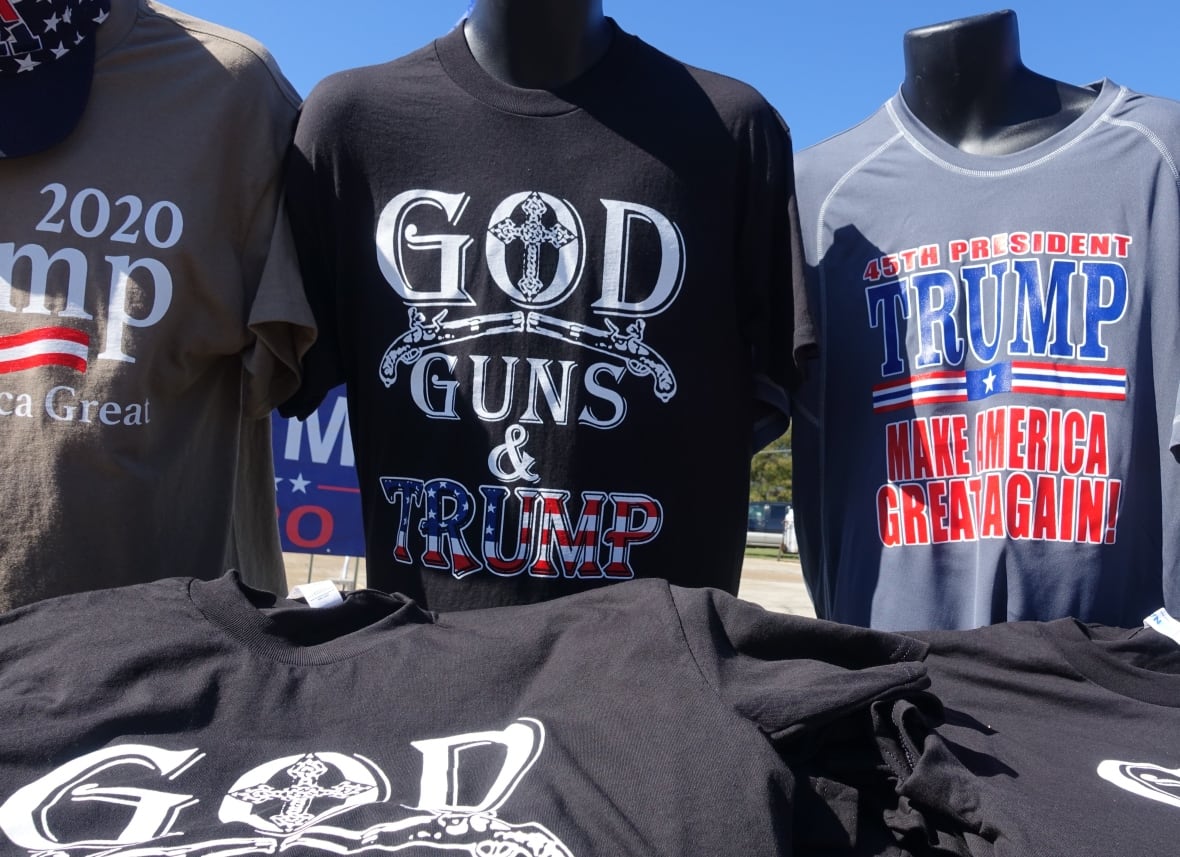 Hunter says Trump is seen as “a means to an end” by evangelicals, who long for the bloody, apocalyptic war that will destroy non-believers, which they of course will watch from on high, having been “raptured” up to heaven.

Trump’s decision to move the U.S. embassy from Tel Aviv to Jerusalem, they believe, is a big step along that path. Central to their eschatological belief system is the reconstruction of the Temple on the disputed plaza in Old Jerusalem, which of course would necessarily involve demolishing two of the most sacred buildings in Islam, which of course would trigger a regional conflagration, all the better to usher in the cleansing death of most of humanity.

Trump has also appointed a slew of conservative judges, which evangelicals fervently hope will result in the repeal of Roe V. Wade and a recriminalization of abortion.

A year out from the next presidential election, a recent poll by the Public Religion Research Institute suggested that Trump’s evangelical support remains monolithic and unbudged. (It may not guarantee his reelection, but it also might clinch it.)

The survey is exhaustive, the sample large. And its most remarkable, if wholly predictable, finding was that a plurality (47 per cent) of white evangelicals effectively say nothing Trump does or says would change their support for him, while 16 per cent say his behaviour actually strengthens their devotion to him.

Further, 99 per cent say he should not be impeached.

That he is evidently not religious himself, and is a lusty and enthusiastic sinner, matters not at all.

That he made American military aid contingent on a foreign power digging up some dirt on one of his political opponents is immaterial.

Most Americans — 65 per cent, according to PRRI — may now find Trump’s behaviour undignified and damaging to the presidency, but not white evangelicals. They are, in fact, the only religious group in the survey to disagree.

There are only two reasonable explanations for this. Trump is the white evangelicals’ version of V.I. Lenin’s useful idiot, a character who is helping achieve their apocalyptic fever dreams, but who will perish along with the rest of us as the faithful perch in the clouds. Or the white evangelical version of Christianity is a darker, uglier thing than the smiles and the welcoming hugs and the blessings would have you believe.

White evangelicals, for example, are in general keenly alert to Trump’s white nationalist, nativist leanings. When he orders families separated at the southern border, most white evangelicals are right there with him.

When he proposes removing protections from transgender people, surely among the most vulnerable of us, they’re A-OK.

When he invites children visiting the White House to help build his border wall with their own personalized bricks, his loyal white evangelicals are right there with him.

The 17 women who have publicly accused him of sexual misconduct are just shrugged off as leftist harlots. The senior officials who have spoken out against his abuses of power or investigated him are just the infidel Deep State.

Unsurprisingly, the demarcation line for Trump where evangelicals are concerned is racial. Eighty-six per cent of black evangelicals surveyed by PPRI said they disapprove of Trump. So did 72 per cent of Hispanic Catholics, many of whom are evangelical. Now why would that be?

And yet, if you tell a white evangelical that you believe Trump is the perfect incarnation of modern America, they will likely react with a startled frown (as did the white U.S. Customs agent who asked me recently if I’m a “fake news” reporter who hates his president).

Meaning that down deep, they know what they’ve created, and that he is the very opposite of the shining national ideals they claim to still hold dear. In Jesus’ name.